Alibi Farm consists of 147 acres donated to ALC, and 81 acres on which some home sites are permitted and a conservation easement has been placed.

Col. and Mrs. Marion Smoak have created a conservation development unique in the Aiken area. From a 280-acre farm with high development potential, they have created a sensitive development that carves out eight house lots and preserves the remainder of the tract. A major area of wetlands and flood plain along Shaw’s Creek has been donated outright to the Aiken Land Conservancy. This 147 acres contains a variety of wetland plants, land dry enough to allow hikers to wander under big old hardwoods, and access to Shaw’s Creek on an old corduroy road for canoers and other boaters who can carry in small craft.

The central core of the property, an active hay meadow and barns, will be maintained by the homeowners in its present agricultural state. The eight house lots, varying in size from 5 to more than 17 acres, surround the central core. Each lot is designed to look out over and protect the best views across the rolling terrain. Built into the plan are broad travel corridors for uninterrupted access across land by turkeys, deer, and other wildlife. A sweep of large hardwoods is maintained along Fox Pond Road. This plan is geared to protect the rural character of this property forever. 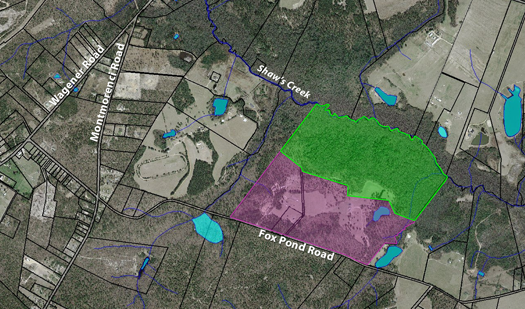 Aerial photo showing the portion of Alibi Farm donated to ALC (in green), and the portion (in pink) that contain some building lots nestled in the midst of land on which a conservation easement has been placed.